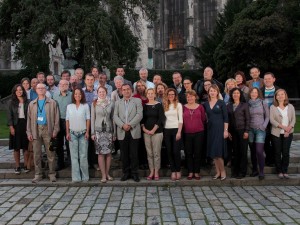 The Study Trip to Slovak CFs that took place on 15-20 September 2014 was the fifth study visit in a row. It has been a part of the CF Study Trip project  of the C.S.Mott Foundation. Preceding visits were paid to CFs in Bulgaria (2010), Czech Republic (2011), Poland (2012) and Romania (2013). This site has been created as a support space for the participants of the Study Trip – both visitors and CF hosts.

Presentation of the the Study Trip Project in Bratislava ( Boris Strečanský)

The concept of CF Study Trip consists of combination of several elements:

The origins of the idea to organize annual CF study trips to different countries in Central and Eastern Europe (so far) where CFs have grown in last two decades can be found in the shared awareness that towards the end of the first decade of 2000 when there has been a vacant regional space (V4 or CIS or Balkans) for sharing and reflecting different developments in this field.

After phasing out of Community Philanthropy Initiative (CPI) meetings hosted by the EFC (European Foundation Center), most of the networking and sharing among practitioners was taking place ad-hoc or on a national, or, if at all, on a sub-regional basis. The impetus for starting this process was given by the Mott Foundation and the Association of Bulgarian CFs.

The number and composition of participants proved validity of the concept and visits organized so far.

The diversity of countries in Europe, different tempos and approaches of support and development of CFs and the very uniqueness of each community in which CFs have been established, only emphasized a need to stop and reflect of what is it that we see, that we do and that happens around us in order to be able to make more informed and hopefully better decisions in our work. Be it a work for a CF, CF Association, CF Support organization or a donor interested in CFs.

Last but not least, CFs represent a real-life social laboratory of community transformation that deserves reflection by peer practitioners and academic researchers. That is the reason why study trips from early on included participants whose interest and roles were research based.

And it is the combination of the practitioners’ experience with the experience of experts that has been a unique feature of the Study visits so far and their added value to participants.

The study visits have been crafted on the go as an open-end and open-process endeavor that has one common denominator: a genuine interest of their participants to share and to reflect.

The participants include CF practitioners from existing CFs and promising CF initiatives, CF support organizations, national CF associations and federations, experts and researchers interested in issues such as the community cohesion and social capital, and donors supporting community philanthropy.

Center for Philanthropy n.o . is a not-for-profit organization established in 2002, based in Bratislava, Slovakia with a mission to develop philanthropy and civil society. Its history is connected to the development and support of community foundations in Slovakia and the idea that strong civil society needs resources domestic philanthropic resources.

The Center is an infrastructure support organizations that through its services and projects to foundations and non-profit organizations, stimulates giving and civic engagement , contributes to the policy debate on the legal and fiscal framework for civil society, develops data and knowledge about civil society and philanthropy. The Center is co-founder and secretariat of the Association of Corporate Foundations of Slovakia and Coalition for Support of Individual Giving.

More than 70% of the Center’s income comes from services, the rest comes from the grants, donations and percentage philanthropy mechanism.

The Center played a role of a National CF Support Organization until the formation of the Association of CFs, which gradually took over the CF support functions. Today the Center serves besides its core services as a civil society and philanthropy think-tank. It is a member of the WINGS.

The Association of Slovak Community Foundations- AKNS was created in 2003, and has 8 members at present. The mission of the Association is to foster development of Slovak community foundations, and to help create partnerships with donors and different institutions.

The Association brings together organizations which have a unique role in their communities: community foundations accumulate an in-depth knowledge of their communities’ needs, in partnerships with their donors they fund initiatives which strive to meet these needs, and they disseminate the ideas of local giving, self- help and voluntary involvement.

AKNS has developed standards of CFs that represent a set of characteristics that define the community foundation.

AKNS supports development of Slovak community foundations by means of a variety of services, support for self – help education and exchange of experience. AKNS provides some of these services also to non – member organizations and emerging initiatives in Slovakia and abroad.

Young Philanthropists is an innovative grant program administered by young people. The Program is implemented under the umbrella of the Association of Slovak Community Foundations in its member foundations. The purpose of the program is to bring the ideas of philanthropy to youth communities, to lead young people to be actively engaged in their communities, to support many talents and interesting initiatives of young people.