“I bring back home as inspiration the deep feeling that there is an European culture of philanthropy and that the Community foundations are devoted to a strong development. And also that we need to nurture the European network. Speaking with peers is always a great source of energy!”

The Community Foundation Study Visit to the United Kingdom from September 5-9, 2017 has been the seventh study visit in a row. Preceding visits were paid to Bulgaria (2010), Czech Republic (2011), Poland (2012), Romania (2013), Slovakia (2014), the U.K. (England and Northern Ireland, 2015), and were organized as an initiative of the C.S. Mott Foundation. The 2016 Study Visit to Germany and this years’ visit to the U.K. has been organized by the European Community Foundation Initiative (ECFI) as a part of its peer learning activities, which aim to strengthen practice-based learning among CFs and CF Support Organizations in Europe. The funding for these activities was provided by the C.S. Mott Foundation, Körber Stiftung, Bosch Stiftung and the Lipoid Stiftung. 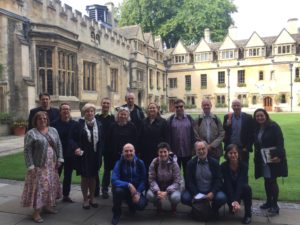 There were several reasons why the 2017 CF Study Visit has been organized in the U.K.–specially England and Scotland.

The 2017 CF Study Visit consisted of a series of meetings and visits in Oxfordshire CF and Foundation Scotland – our fabulous host CFs – that were designed to further the background for intensive debates and reflective discussions among the  participants. More info the flow of the visit is available in the detailed agenda.

Participants had also access to the U.K. Guide to Community Foundations prepared by ECFI before the Study Visit.

“I had a chance to talk about common future plans with potential partner organization. We continue communication now pursuing the plan. Also, I have a better idea, what community foundations are and have more access through different platforms and participant organizations throughout the Europe. I would also like to highlight the motivational and inspirational part of this meeting. Getting to know each other in the field, prevents burnout in the social field and motivates as you hear about all the success stories and feel the inspiration of different stakeholders”.

15 participants of the Study Visit consisted of CF practitioners (staff, board members, volunteers, donors) from existing CFs and promising CF initiatives, CF support organizations, national CF associations and federations, experts and researchers interested in issues such as community cohesion, social capital, foundations and community philanthropy and came from different parts of Europe (East, West, North, South). 7 participants were first time attendees, while 8 have attended Study Visits in the past. More information about the participants is in the  profile book. 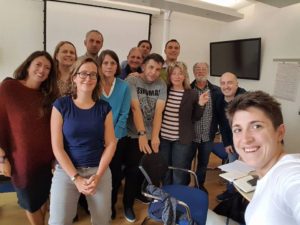 The CF Study Visit 2017 has been another great opportunity for various CF practitioners to meet with their peers, interact and learn through joint interaction and experience sharing. As one of the participants put it:

“I would like to thank organizers for this fantastic opportunity to participate in the activity. it was very valuable experience for me. Good luck and I hope we’ll meet each other soon.”