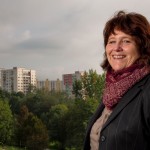 „No, never“,  I would have answered three months ago.

Everything has started with a phone call from Boris Strečanský[1].  He asked if we would consider being a partner with the Ukrainian Podilska Hromada Community Foundation in the CF2CF Exchange program supported by the European Community Foundation Initiative (ECFI). We agreed, but to tell the truth, we were not that excited.  And this would soon change! 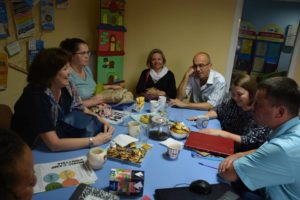 Meeting in the office of the Podilska Hromada Community Foundation

The project was approved, and this prompted me to try to google Vinnytsia. Besides learning that it is the city in which the Podilska Hromada Community Foundation is located, I  learned that „The name of Vinnytsia appeared for the first time in 1363. It is assumed that the name is derived from the old Slavic word “Vino”, meaning “given as a gift.“[2]

During the first part of the project, the Ukrainians came to visit us to Banska Bystrica. Then, in June, it was our turn to travel to Ukraine.  We traveled by car, two staff people, one member of the Board and one volunteer.

Driving itself was an experience! The first challenge came on the Slovak border. The border patrol policeman´s behavior reminded us of their counterparts  28 years ago – impolite, arrogant, demonstrating their power. But what was different from 28 years ago was our self-confidence and the feeling that this strange man could not intimidate us. We are citizens of a democratic country and the EU, we know our rights, and we let him know. Roads in Ukraine are not the best in the world, but the beautiful nature, interesting architecture and small villages with many churches along the road compensated for the inconvenience of the travel.

A visit to City Hall had been planned on our first day. We expected a formal meeting of handshakes and nice speeches and were prepared for it to end very quickly. We could not have been more wrong. For me, this was one of the biggest and most pleasant surprises. A young woman, the Head of the Urban Institute, introduced us the Institute’s main strategy to make Vinnytsia „a place with the sense.“ Besides many activities such as an energy efficiency project a river project, and involving citizens in co-designing developments in their city, her Institute is also responsible for the cooperation with local NGOs. The Podilska Hromada CF is one of its key partners. The City and NGOs have collaboratively created a space where people can discuss their ideas of city development, ask questions and comment on the decisions of city officials. 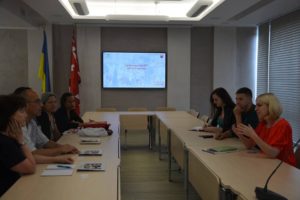 Meeting at the Mayor’s office – Vinnytsia

In Vinnytsia we could witness the convening role of a community foundation – bringing people together, networking, creating bridges, breaking stereotypes, and creating space to think differently than usual.

Later we also met with representatives of the cultural and educational department and learned about several joint projects of the City and Community Foundation. During those meetings and discussions, we had our first encounter with the effects of the war. Very emotional and very sad. The former director of the high school mentioned fundraising to produce memorial panels for former students who had recently died in the war. Can you imagine this, in these days, in Europe?

The rest of the day we spent with our Ukrainian colleagues in the foundation’s office. In a very cozy and pleasant atmosphere, we talked about several common issues. For example, we shared stories about the Board’s fruitful and its unsuccessful efforts in fundraising.

We learned about a very inspiring project „Youth Music Camp“ that gives an opportunity to young people between 13 and 17 to experience the joy of music. Through the project, young people, including those without any previous musical education, participate in a one week camp, during which they learn to play instruments or to sing, recognize their talents and taste how much fun it can be to work together as a group.  The camp ends with a big concert for the public in which everybody participates. This is one of the very concrete examples from the Podilska Hromada Community Fund that we took home and will try.

I almost forgot to mention one interesting moment which generated amazing energy and in-depth discussions. The Community Foundation is hosting a young business professional, Katherine, a Peace Corps Volunteer, who comes from New York.  Her comments and questions during our conversation brought us to the point, to why we do what we do and how we can communicate it outside of our bubble.

We also had another encounter with the war. The Podilska Hromada Community Foundation is one of the institutions which regularly organizes a collection of money and goods for the Ukrainian Army.

Another inspiring day full of rich experiences. We visited the NGO “Harmony”,  an organization helping people with different physical disabilities. Raisa, its charismatic leader, pays attention not only to the architectonical construction of the building which is fully accommodated to the needs of people with disabilities but, most importantly, she helps people feel accepted, useful,  strong, and to live normal lives. 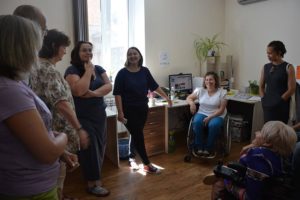 Meeting with representatives of the NGO Harmony in Vinnytsia.

Those of us who lived with socialism understand how brave and important this is, because, in our recent past, people with disabilities were generally hidden away in institutions and had no chance to be integrated into normal life. And even now,  28 years after the changes in Slovakia, people that are somehow different still face hardships and difficulties in daily life. Raisa earns our great appreciation! This facility also has a beautiful kitchen and is a place where local civil society groups can meet. We had a chance to taste it, to taste it literally. Our friends regularly organize here a „Community Kitchen, “ and we were invited to participate. People from different NGOs met in this facility, we prepared lunch together, and during the common cooking and eating, we talked about our work and experiences of how small initiatives can change the city. Very pleasant and informative! 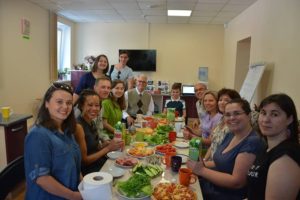 In the afternoon, we walked through the city park and talked to people who work on the city waste separation project, which is quite new for Vinnytsia and, once again, Podilska Hromada CF is a partner in this effort.  Our walk ended at the fountain where we had agreed to meet with a Board member and had planned to have dinner together.  Unfortunately, he came to say goodbye as he had to leave.  His friends from a war affected area needed his help, so he was about to get into his car and drive… no questions, no excuses, no comments. After he had left we had a long discussion about how it feels to live in a country in a war, how absurd and challenging it is, on the one hand, to be prepared for anything and, at the same time, to live „a normal life.“ 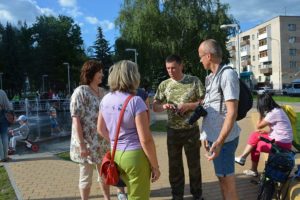 On this day we met with people from 8 other community foundations from Ukraine to discuss and exchange our experiences in building an effective institution, attracting new donors and involving local businesses. Our friends from the Podilska Hromada CF had invited their donors, and they spoke of their motivation to work with the CF. Once again, we learned a lot.  Just a few notes I jotted down:

„The CF has my trust, I do not have time to look into the details”

,…  giving to CF gives me an alibi when many local groups ask me for support, I can direct them to the CF ..”.

“ I give money, and I regain energy”

”… money for the administration?  Sure, I do not have time to do it myself. I need to feel emotions.„

I could write much more, but this is not meant to be a detailed report on the CF2CF Exchange. These reflections are simply an attempt to express my personal feelings, experience, and admiration for all the work we saw in Vinnytsia, that was done thanks to the Podilska Hromada Community Foundation.

I believe that the project fulfilled its goal. I hope that we, as a somewhat „older sister,“ were able to offer some experience and useful models. At the same time, we learned a lot, more than we expected. We also enjoyed the enormous enthusiasm, creativity, and energy of our younger colleagues. I am sure that our relationships will continue beyond the project.

One more personal note: We traveled to Ukraine with certain stereotypes about the country. I am sorry for this, and I learned my lesson.  Ukraine is a wonderful country.  We met many people who are very devoted to their country and the work they do, in spite of the extremely difficult situation they are facing at the moment. I am personally convinced that Ukrainians should join us in the EU and we should use any opportunity to help them.

This site uses Akismet to reduce spam. Learn how your comment data is processed.